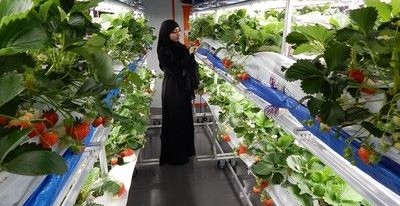 Sharp will make its first foray into the agriculture business in the second half of fiscal 2016, rolling out a cutting-edge factory system (plantfactory/indoor farming) for raising strawberries in the United Arab Emirates. 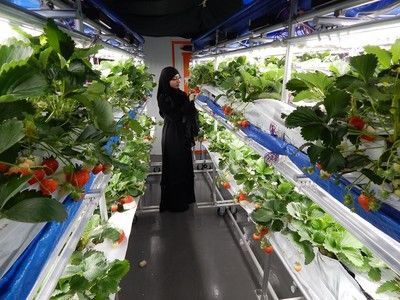 The system will produce sweet strawberries by creating an optimal environment with the use of the electronics maker’s proprietary technologies. For example, an LED lighting system will shine light in the ideal wavelength for promoting growth.

Because strawberries are a disease-prone fruit, Sharp’s Plasmacluster air-disinfecting technology will be employed to kill viruses. In the future, the company plans to also incorporate its solar panels into the setup.

The systems will be sold for around 100 million yen ($820,000) apiece, roughly one-tenth the cost of building a conventional factory farm. It takes just about four months to set one up, roughly a third of the time needed with comparable systems. One farm can produce 30 packs of strawberries a day.

Sharp plans to build a demonstration farm at a sales base in Dubai as soon as May. By utilizing its existing sales channel for consumer electronics and copiers, the company plans to target local supermarkets, hotels and restaurants, as well as wealthy people.