Bright green lettuce leaves are ready for picking, while ripe red tomatoes bow their stalks. Natural produce as they seem to be, the lettuce is grown inside an artificially lit plant factory, while the tomatoes are cultivated inside a solar plant factory, both operated by Chiba University.

Chiba University is a pioneer in this area, having over a 30-year history in growing plants hydroponically. Now operating five solar plant factories and two artificial light plant factories, the university stresses the importance of such factories. 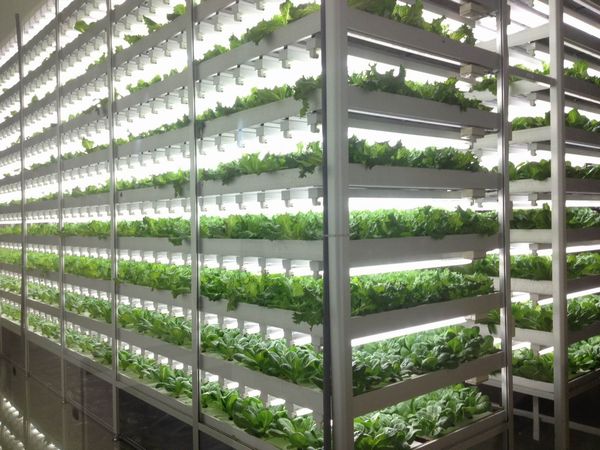 One reason is due to the drastic changes in the distribution and consumption systems of Japan, as an increasing number of people are deciding to eat out, coupled with the increasing trend of importing fresh produce and vegetables from other countries regardless of their high prices.

Another serious problem that Japan faces is “a critical shortage of next-generation farmers, together with the sharp increase in the elderly population,” says Toru Maruo, a doctor of agriculture and professor at the Graduate School of Horticulture, Chiba University. Maruo is also a key player in the vegetable plant factory project that is participated in by over 60 corporate entities.

According to government statistics, the average age of farmers in Japan was 66.5 years in 2013, of which 46.8 percent were 70 or over. As Japan’s population aged 39 years or younger is below 5 percent, the number of Japanese farmers in 10 years will dwindle to about one-third the figure of today; a drastic reduction never experienced by any nation in history.

At the artificial light factory, the initial challenge of producing good, consistently high-quality produce had been overcome relatively easily and 80 to 100 grams of leaf lettuce can be harvested ten days after planting. The second challenge was to reduce costs. To this end, Chiba University simplified the workflow and experimented with various lighting and air conditioning methods until its lettuce factories could better the cost of ¥700 per kilogram.

Another eye-catching development in this area is the recent production of nutrient-fortified vegetables. By adjusting the nutrient solutions and through lighting innovations, some vegetables can now be produced at Chiba University’s plant factories to meet the health requirements of certain consumers.
For example, low-potassium lettuce can now be produced for kidney disease patients who must control their potassium intake. Such innovation could be defined as a new chapter in plant factories that bring fresh produce production closer to medicine.