Working in Miyagi Prefecture in eastern Japan, which was badly hit by powerful earthquake and tsunamis in 2011, Japanese plant physiologist Shigeharu Shimamura turned a former Sony Corporation semiconductor factory into the world’s largest indoor farm illuminated by LEDs. The special LED fixtures were developed by GE and emit light at wavelengths optimal for plant growth.

The farm is nearly half the size of a football field (25,000 square feet). It opened on July and it is already producing 10,000 heads of lettuce per day. “I knew how to grow good vegetables biologically and I wanted to integrate that knowledge with hardware to make things happen,” Shimamura says. 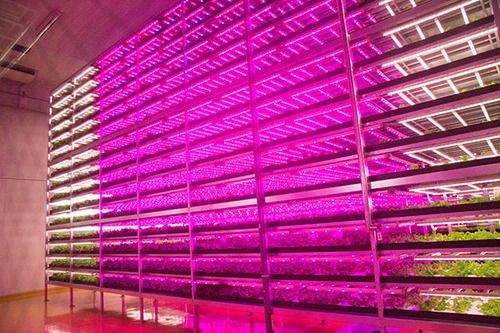 The LED lights are a key part of the farm’s magic. They allow Shimamura to control the night-and-day cycle and accelerate growth. “What we need to do is not just setting up more days and nights,” he says. “We want to achieve the best combination of photosynthesis during the day and breathing at night by controlling the lighting and the environment.”

Shimamura says that the systems allows him to grow lettuce full of vitamins and minerals two-and-a-half times faster than an outdoor farm. He is also able to cut discarded produce from 50 percent to just 10 percent of the harvest, compared to a conventional farm. As a result, the farms productivity per square foot is up 100-fold, he says.

By controlling temperature, humidity and irrigation, the farm can also cut its water usage to just 1 percent of the amount needed by outdoor fields. The farm uses 17,500 LED lights spread over 18 cultivation racks reaching 15 levels high.

Shimamura got the idea for his indoor farm as a teenager, when he visited a “vegetable factory” at the Expo ’85 world’s fair in Tsukuba, Japan. He went on to study plant physiology at the Tokyo University of Agriculture, and in 2004 started an indoor farming company called Mirai, which in Japanese means “future.”

The concept took off in 2011, when GE approached Shimamura with an idea for using advanced LED lights to illuminate the farm. The LEDs last longer and consume 40 percent less power than fluorescent lights. The companies started testing the technology in March 2012 and came up with the final design a year later.

The GE Japan team believes that indoor farms like the one in the Miyagi Prefecture could be a key to solving food shortages in the world. Mirai and GE are already working on “plant factories” in Hong Kong and the Far East of Russia. Says Shimamura: “Finally, we are about to start the real agricultural industrialization.”