Corporate offices in Tokyo don’t exactly have a great reputation. Drab, grey walls. Generic cubicles. Desks crammed next to each other. These are some of the images we conjure up. But there are an exceptional few trying to break the mold. And they’re not always tech startups. 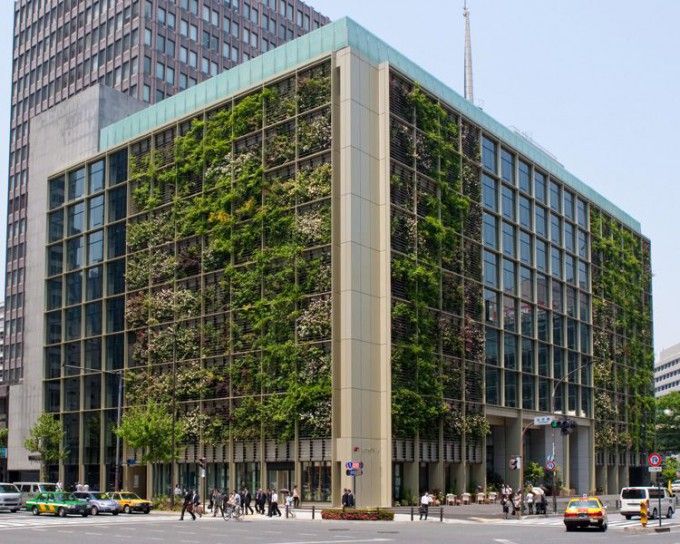 In the center of Tokyo’s busy financial district is Pasona, a multi-national recruitment firm. When the company decided they needed a new headquarters they hired Japanese architect Yoshimi Kono to help renovate a large, 9-story building and adorn it with a lush, green wall.

The project consists of a double-skin green facade, offices, an auditorium, cafeterias, a rooftop garden and most notably, urban farming facilities integrated within the building.
Inside the 19,974 square metre office building there are 3995 square metres dedicated to green space that house over 200 species of plants, fruits, vegetables and rice that are harvested, prepared and served at the cafeterias within the building.
It is the largest and most direct farm-to-table of its kind ever realised inside an office building in Japan.

The double-skin green facade features seasonal flowers and orange trees planted within the 3′ deep balconies. Partially relying on natural exterior climate, these plants create a living green wall and a dynamic identity to the public.
This was a significant loss to the net rentable area for a commercial office. However, Pasona believed in the benefits of urban farm and green space to engage the public and to provide better workspace for their employees. 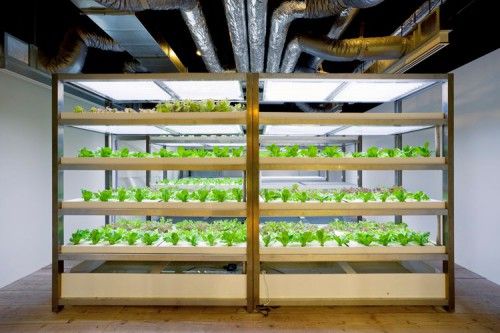 rice paddy is equipped with metal halide, and other crops are equipped with HEFL, fluorescent and LED lamps and an automatic irrigation system. An intelligent climate control system monitors humidity, temperature and breeze to balance human comfort during office hours and optimise crop growth during after hours. This maximises crop yield and annual harvests.

Japanese architect says “My client has a larger vision to help create new farmers in urban areas of Japan and a renewed interest in that lifestyle.”
“One way to encourage this is to not just tell urban communities about farms and plants, but to actively engage with them through both a visual intervention in their busy lifestyle and educational programs focusing on farming methods and practices that are common in Japan,”

Besides creating a better work environment, Pasona also understands that in Japan opportunities for job placement into farming are very limited because of the steady decline of farming within the country. Instead, Pasona focuses on educating and cultivating next generation of farmers by offering public seminars, lectures and internship programs.

The programs empower students with case studies, management skills and financial advices to promote both traditional and urban farming as lucrative professions and business opportunities. This was one of the main reason for Pasona to create urban farm within their headquarters in downtown Tokyo, aiming to reverse the declining trend in the number of farmers and to ensure sustainable future food production.

Currently, Japan produces less than one-third of their grain locally and imports over 50 million tons of food annually, which on average is transported over 9,000 miles, the highest in the world. As the crops harvested in Pasona HQ are served within the building cafeterias, it highlights ‘zero food mileage’ concept of a more sustainable food distribution system that reduces energy and transportation cost.

Japan’s reliance on imported food is due to its limited arable land. Merely 12% of its land is suitable for cultivation. Farmland in Pasona HQ is highly efficient urban arable land, stacked as a vertical farm with modern farming technology to maximise crop yields.

Despite the increased energy required in the upkeep of the plants, the project believes in the long term benefits and sustainability in recruiting new urban farmers to practice alternative food distribution and production by creating more urban farmland and reducing food mileage in Japan.