Posted by Innoplex in Business/Market with No Comments

Next-generation plant factories in this research indicate those factories that produce high performance, high-value added plants that are categorized into 1) genetically modified plants, 2) natural medicine plants, and 3) other high-functional plants.

Note that the market size is calculated based on the shipment value of the following three categories of plants: 1) genetically modified plants, 2) natural medicine plants (e.g. licorice), 3) other high-functional plants (fresh, low-potassium lettuce.)

The plant factories indicate those facilities that enable year-round- or planned production of plants by controlling lights, temperature, humidity, carbon dioxide concentration, culture fluid and other environmental factors within the facilities.
There are following types of plant factories: 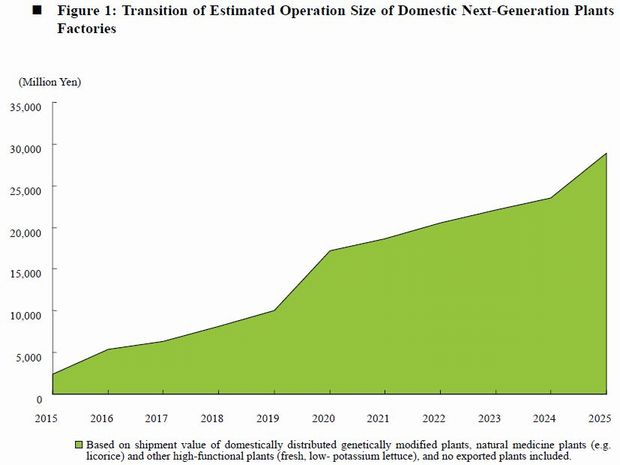 The domestic next-generation plant factories market (for genetically modified plants, natural medicine plants, and other high-functional plants) is likely to be launched in 2015, by which it is estimated to produce 410 tons, or 2.4 billion yen in shipment value.
The market is anticipated to grow steadily to 3,200 tons or 17.0 billion yen in 2020, and 5,900 tons or 29.0 billion yen in 2025, at which the market should be ready to take off to a flourishing stage.

◆ Expected for Further Technological Development and Increase of Market Players

The next-generation plant factories market is expected for technological development in the lightings, air conditioning, and systems control, lowering of costs, cross-industrial and cross-field alignments, and increase in number of market players.

The successful development requires strategic selection of which plants should be targeted in the aspects of function, useful substance, or breeds that are suitable for the alignment. Also, system optimization in the plant factory is also a significant key point.